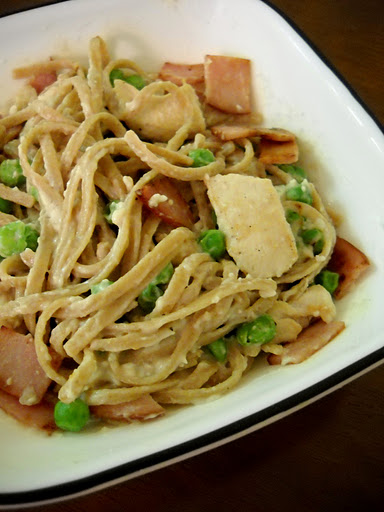 Some pasta tastes light and fresh- you eat it and feel refreshed.  Some pasta does not.  This pasta is the latter. It’s thick and creamy, and you can feel it sticking to your bones.  In a good way.

When I started cooking for myself, I promised myself that I would try more types of food, including re-trying food that I didn’t like and thus hadn’t eaten in years.  Meet ham, a former mortal enemy of mine.  I have never liked ham (except for ham lunch meat sliced so thin it becomes translucent).

I started out by trying Canadian bacon, thinking my subconscious wouldn’t think I was eating ham since it is labeled as bacon.  So first I tried it on my pizza.  Not only did it not make me gag, I loved it.  But I questioned whether it was my love of pizza, pineapple, and cheese that made me tolerate the ham or not.  So I decided to try it with pasta.

So now I have developed a tentative relationship with ham.  This dish was good, but it was a little too hammy for my personal taste.  People who like ham and chicken cordon bleu will like this pasta.  It is a good hearty pasta for fall.

Bring a large pot of salted water to a boil.  Cook linguine according to pasta instructions.  Drain and set aside.

In a small saucepan, whisk together flour and 1/4 cup milk.  Cook over medium heat, whisking in remaining 1 3/4 cup milk and Dijon mustard.  Cook for 6 minutes, stirring constantly, until mixture begins to thicken.  Add blue cheese and stir until melted.  Remove from heat.